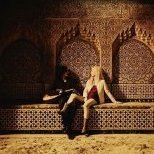 Old Demons of the First Class